Kyoto has a fabulous bus network, so many buses, and even some special schedule for certain days. Especially since Kyoto is also a major tourist area in Japan, so they need to serve the huge number of tourists as well, who also using public transports.

Kyoto City Bus has a fixed rate fare which is 230 yen for adult and 120 for kids. Doesn't matter if you go only 1 km or you go 10 km (if it's still in fixed rate zone), you pay the same price. If you are tourist and may take bus more than three times a day, Kyoto City offers you one-day pass for 600 yen for adults and 300 yen for children.

I made my Commuter Pass in Kyoto Bus Information Center in front of Kyoto Station. Before going to the counter, I needed to fill a form, basically about my identity, school, and which kind of commuter pass I want to choose, etc. And I decided to buy 6 months commuter pass so I don't need to make commuter pass every month. Writing my school name, major, and address in kanji just too tiring for me. It's cheaper as well to buy six-months commuter pass. I needed to show my student ID 学生証 gakuseishou and certificate of commuting status 通学証明書 tsuugakushoumeisho issued by the school.

Here is my Commuter Pass. 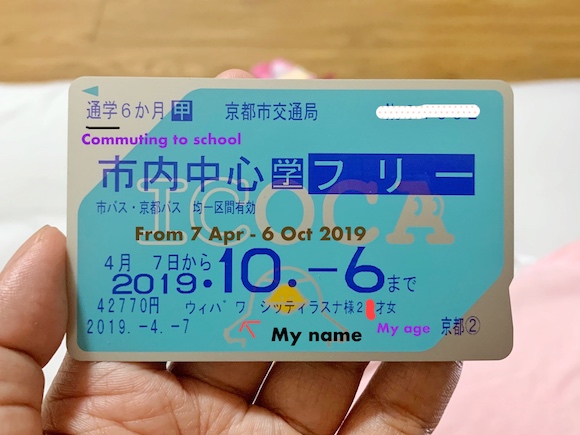 My name, age, and sex are written on the card. In case missing, it's not hard to get it back. Even it is lost, and I cannot get it back, I can reissue 再発行 saihakkou the card and just need to pay around 1000 yen.

And as you can see on the card, the price is 42770 yen and with today's exchange rate it's equal to 5.7 million rupiah. Why rupiah exchange rate so bad la. This card is my really precious card. More valuable than my cash card.