Oleh Una 5/02/2016 09:43:00 AM 14 komentar
I love factory tour! So when I was in Sapporo and read about a open-for-public factory tour, I wanted to give a visit. It was Ishiya Chocolate Factory which also has kind of small theme park and called as Shiroi Koibito Park.

When I was on my way to this park, I feel like that time was my first time getting lost in Japan. I mean, I'm quite confident with my map-reading skill and finding location but that time it didn't work. After getting off at Miyanosawa Station, I didn't know which exit should I go, didn't saw anything information about Shiroi Koibito Park, then randomly I chose Exit 1.

And still I couldn't find anything in neighborhood, signage or anything. *sigh*

Walking and walking~ it was just residential area... but hey, I think I saw European-style building in the west direction. But it's not the park. I passed small river and quite neighborhood. It shouldn't be quite, right? So, I asked a 7-Eleven's staff and it turned out I walked to wrong direction. (ᵕ̣̣̣̣̣̣﹏ᵕ̣̣̣̣̣̣)

Why didn't I use GPS? I forget but I didn't touch my phone when I was visiting Shiroi Koibito Park. Maybe battery off or what or I just wanted to get lost.


Walked straight from 7-Eleven, I saw a striking building with western-style architecture, then I asked the security guard whether it is Shiroi Koibito Park. It is part of it, but it is a Shiroi Koibito Football Stadium which is one of training grounds for Consadole Sapporo, a local soccer team, 9.5% owned by Ishiya. For those of you who love Irfan Bachdim, you might know this team, since currently he is playing for Consadole Sapporo.

Shiroi Koibito Park is located exactly besides the stadium. It has Medieval-style architecture and when you see the buildings, you will feel like, it doesn't feel 'Japanese' at all. Sure Japan loves Western things. You can play in the park for free, but if you want to visit the gallery and factory, you need to pay some yens. 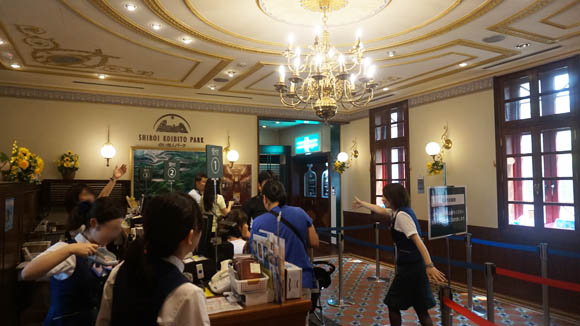 "何名様ですか。” A staff in ticket area greeted me. She asked how many people I go with and me.
"Hitori desu." One person, I answered. Somehow, it feels so sad since other guests are family and couples. (ᵕ̣̣̣̣̣̣﹏ᵕ̣̣̣̣̣̣)

It's not obligatory to deposit bags you're bringing but I was tired carrying my backpack (no more than 2 kgs though) so I deposited my bag on ticket counter. The ticket's price is 600 yen, and you will get one piece of Shiroi Koibito biscuit and Shiroi Koibito Park passport. If you don't speak Japanese, they will also give you the English version of passport, though it is not detailed as the original 'passport'. In addition to guide map and information about the park, you can collect stamps and after 10 stamps, you can be Shiroi Koibito Park's Honorary Member and visit the Factory Walk for free forever by presenting the passport.

Extra stamps will be given in second entry to the park or each 1000 yen spent at the shops. If I lived in Sapporo, I would like to be an Honorary Member and visit this park every week.

In the gallery, you will see sparkling fountain called Aurora Fountain, which was produced by England's Royal Doulton Company in around 1870. There are lamps installed under the water making the water running down looks very beautiful. In the other part, you will see the collection and showcases of antique Chocolate Cups, Packaging Labels, Republic of Colombia exhibition, and Chocolate Time Tunnel. 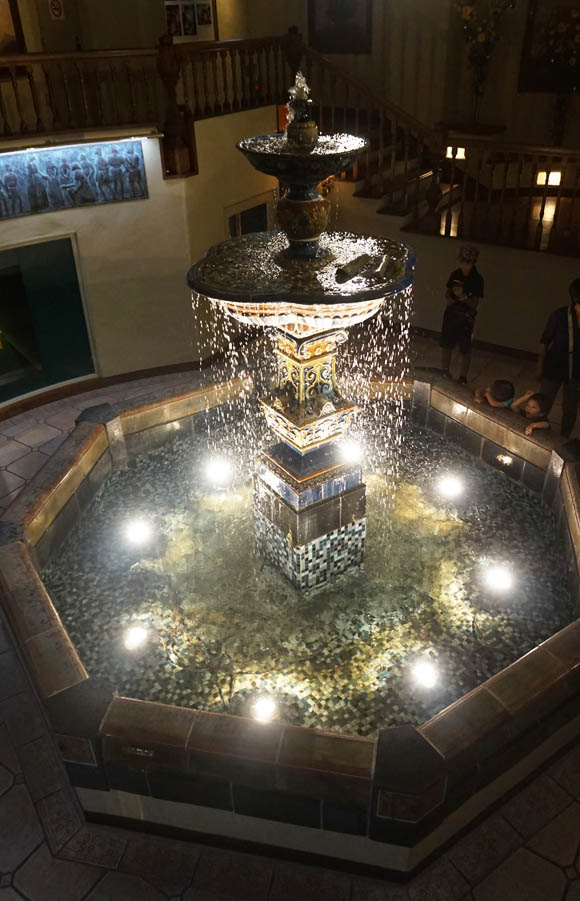 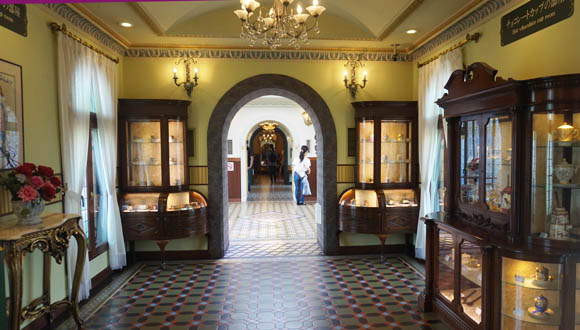 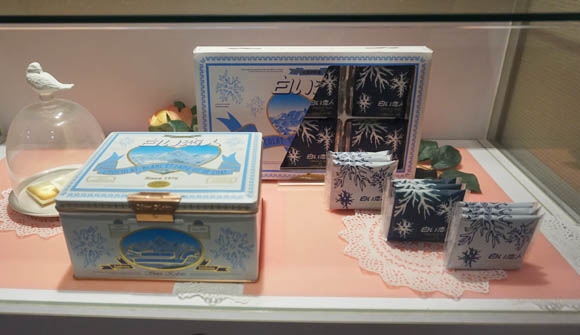 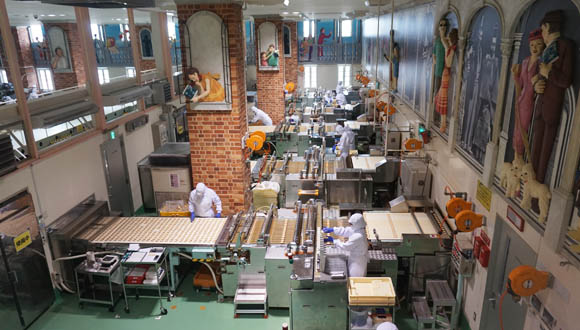 There is a cookiecraft studio you can enter and make confections, and also make your own design of Shiroi Koibito cookies. Visitors also can enjoy chocolate drinks, parfait, or cake in Chocolate Lounge. I wanted to sit for a while here, but unfortunately it was full. (ᵕ̣̣̣̣̣̣﹏ᵕ̣̣̣̣̣̣) 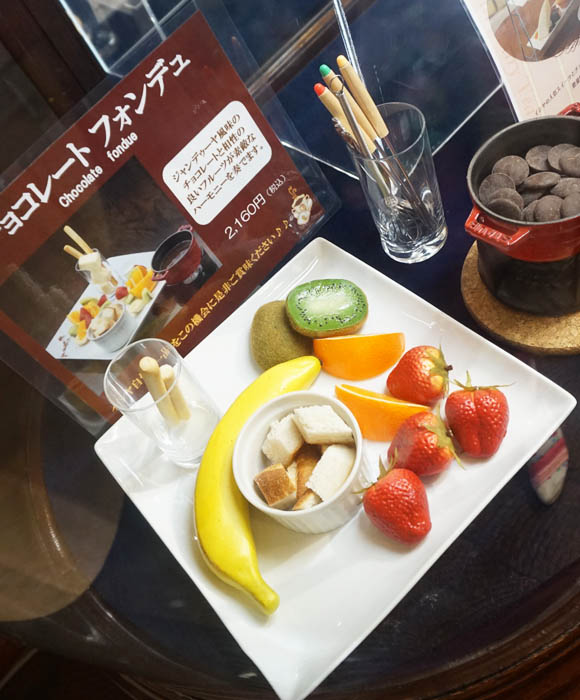 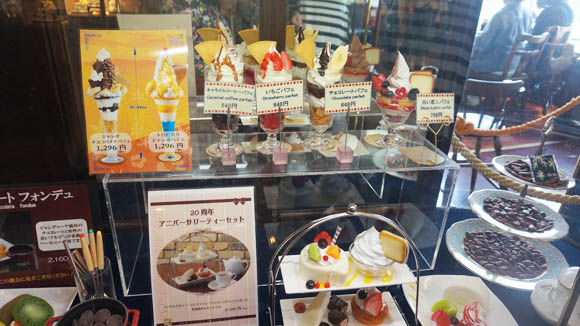 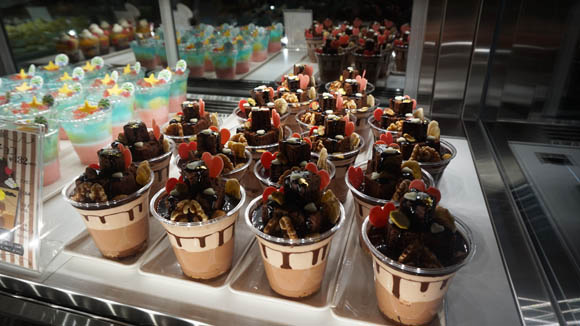 Of course, there is a souvenir shop inside (not Ishiya products) and what I was so excited about is there is Japan Post counter there! I bought a lot of gotochi postcards there! Thank God, I didn't need to go to post office. 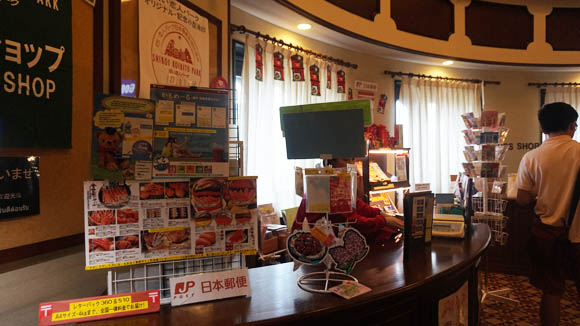 Abraham Lincoln welcomes you. He is Lincoln, right? 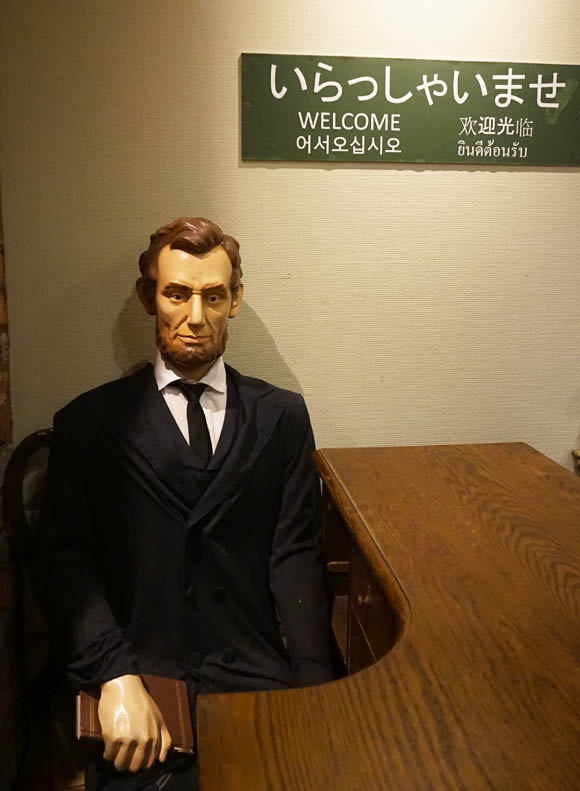 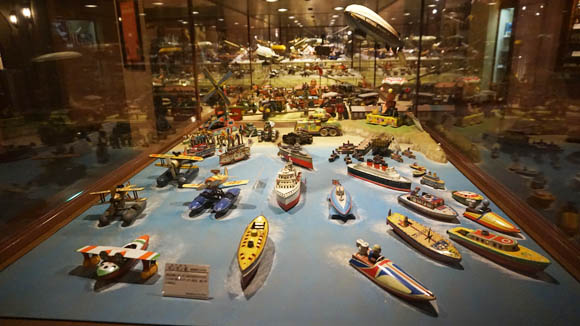 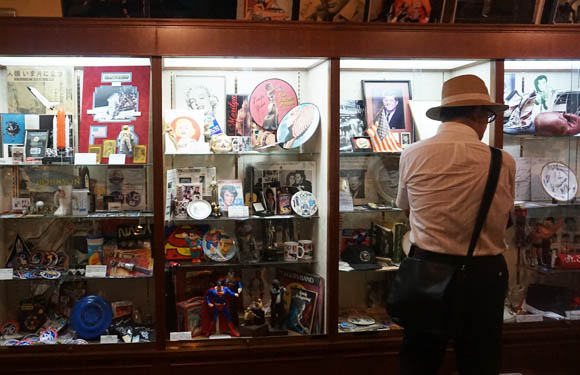 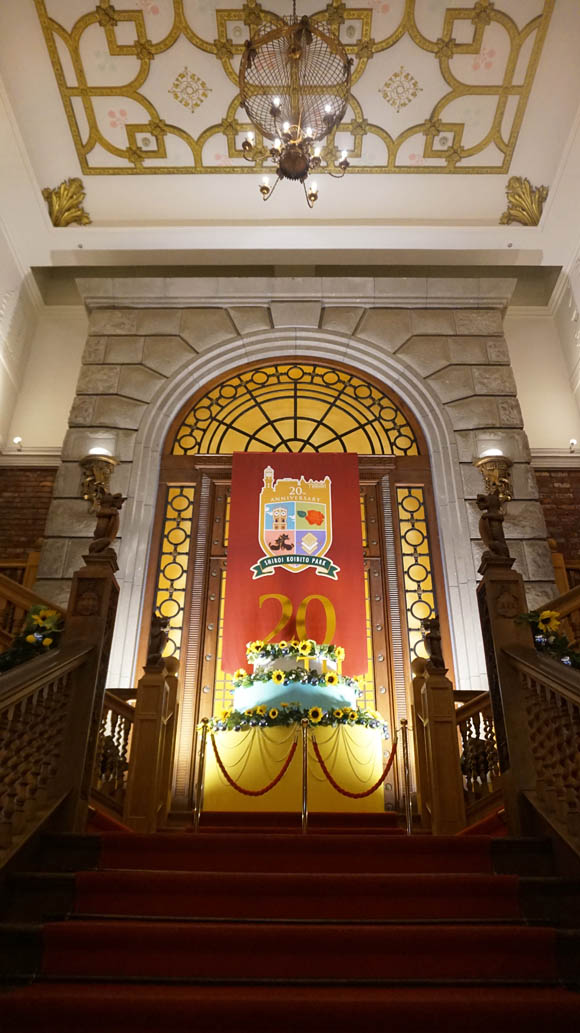 Down to the first floor, there is Shop Piccadilly which sells Ishiya Products, like Shiroi Koibito, Mifuyu millefeuille, Tsumugi Baumkuchen, and range of chocolates. You can me your own packaging of Shiroi Koibito cookies or chocolate drinks with your photos. Wanted to make one but again, so sad if put only my face (*^▽^*) There is also Candy Labo, which sells colorful-candies and you can see how the candy artisans create variety of designs. 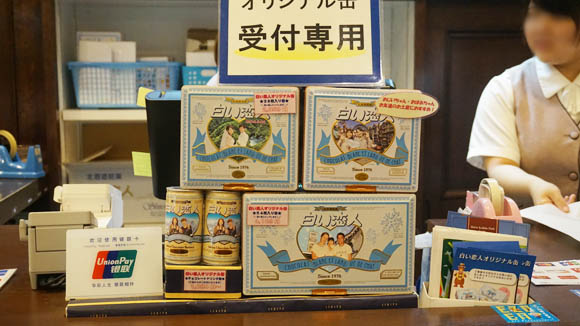 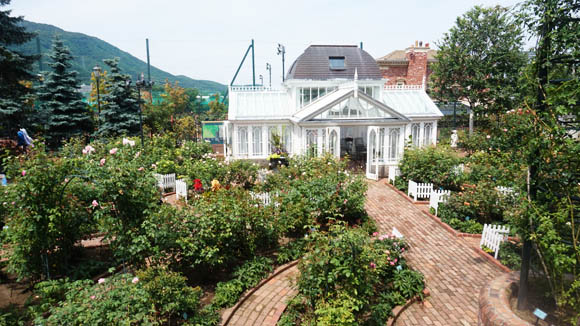 I love the Factory Walk but my most favorite is the courtyard part. It looks like Europeee (never been to Europe, me). There are Rose Garden with not so many roses but there were many beautiful flowers blooming. You can buy soft ice cream here or enjoy 10-minute train trip with Shiroi Koibito Railway. And if you bring your kids, they will be happy since there are a lot of small houses called Gulliver's House and children can enter. 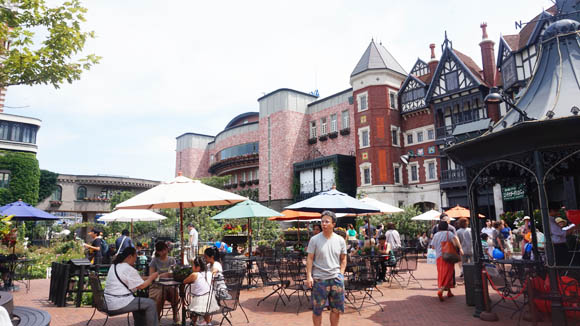 Beautiful flowers. Under the flower bed, there is a part like bunker which children can enter, too, and see the building from the bunker. Sooo envy. 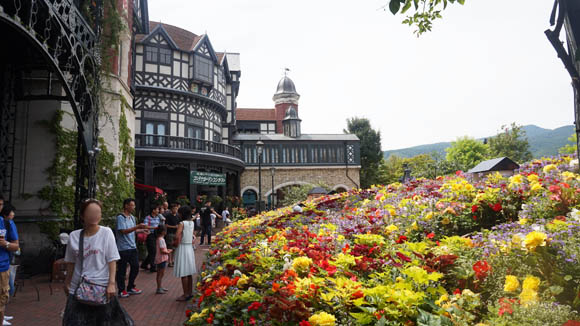 Gulliver's House for children. I don't know if adults can enter too, maybe can, but I didn't try because I was alone and shy... 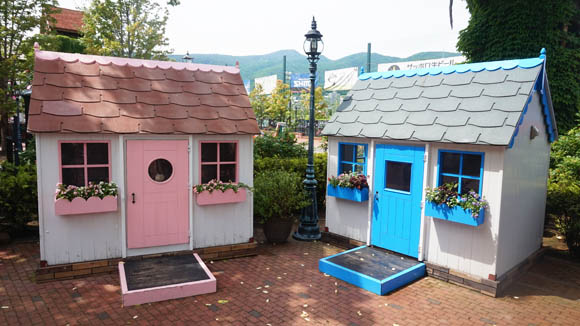 Soft Ice Cream House. It was summer and everybody needed ice cream! 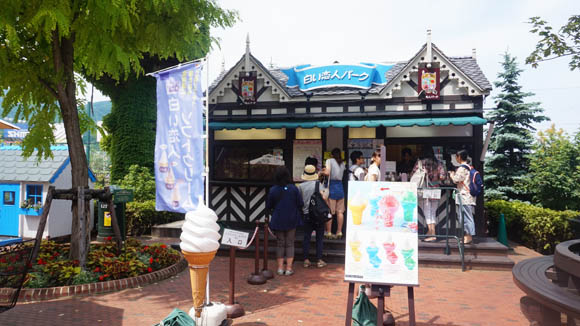 Then I went back to Ticket Counter in Tudor House. After I took my bag, I asked the staff the nearest station. They provides detailed map to go and from the station. Then, I found out the nearest exit is Exit 5.